It’s disturbing to see so many on the right upset by the “deplatforming” of life long crackpot and a prolific hysteria profiteer, Alex Jones, from several large social media sites. Let’s get this out of the way. I am of the opinion that Alex Jones is and has always been a malignant degenerate clown who represents the absolute bottom of the barrel of the bottom feeders of the internet, in the media, and of humanity, and if ever there was a cretinous sack of offal deserving of being deplatformed, it’s Alex Jones. Period.

For those expecting this paragraph to begin with “but…” and end with a defense of unrestricted freedom of speech, I’m afraid that, in this country, at least, freedom of association is still also a protected right. For the pseudo-intellectual jerks and the pop-con punditry actually morally credulous enough to believe Alex Jones is entitled to spew his stupidity on any platform he wants, here’s a refresher on how freedom of speech and freedom of association actually work.

If a bunch of degenerate racists want to burn a cross to celebrate racist white political hegemony for the entertainment of their imbecilic, consanguineous kin, that is their freedom of speech. If, however, they want to do so on the front lawn of a minority family’s lawn, the owners of the private property have absolutely zero legal or moral obligation to tolerate, let alone facilitate, the “freedom of speech” of the degenerate racists.

It is exactly this principle of freedom of association and freedom of contract that is at question in the long overdue deplatforming of Alex Jones and his unconscionable conspiracy idiocy that has slandered and libeled hundreds of innocent people over the years. Private social media platforms have no more obligation to tolerate Alex Jones’s contemptible nonsense than Pepsi-Cola has to advertise Coca-Cola products on their packaging.

And, since it’s clear that many on the right have lost their damned minds, I apparently also need to remind them that this is precisely the bad arguments made by the progressive left when they push their absurd “fairness doctrine“. If you believe privately owned social media platforms are obligated to provide Alex Jones a platform to vomit his schizophrenic bile, you must then advocate for Fox News to provide “equal time” to people like Shaun King, Rachel Maddow, and Bernie Sanders.

Is it clear now? 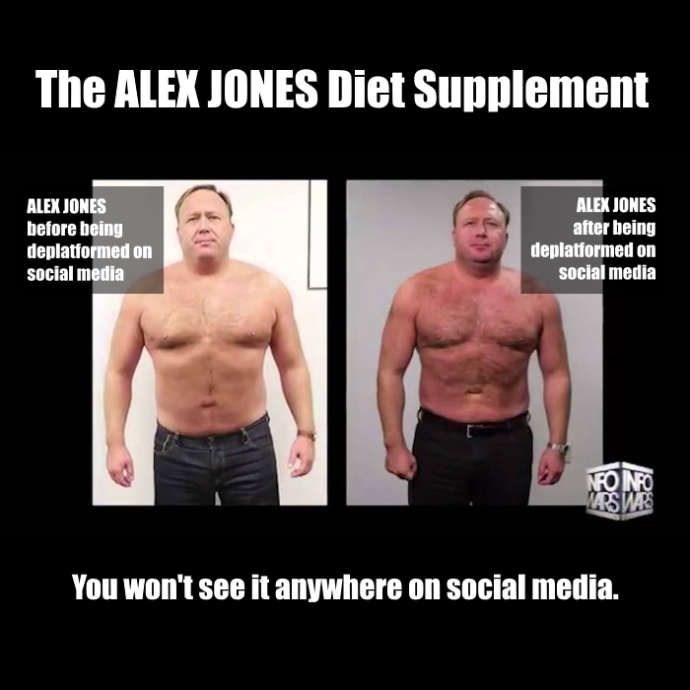