The Bureau of Economic Analysis third estimate of real GDP growth was revised down to 3.2% for Q3 in 2017. The last two quarters remain in line with the performance of the economy since 2015, but below the performance of 2014, when GDP growth last peaked above 5%. Current consensus for Q4 GDP growth is 2.9%, but the official first estimate won’t be out until later this month. At 3.2%, the economy is expanding healthily, if not robustly.

The Federal Reserve raised the target Federal Funds Rate from 1.25% to 1.5% at their December meeting, citing continued growth in the economy, and they are widely expected to continue raising rates in 2018 as the economy continues to expand and inflation rate remains at or above 2%.

The Inflation Rate was 2.2% in November and is expected to remain at that level through December. This level of inflation, however, is relatively tame, especially considering past growth markets. Aggressively expanding markets (with GDP growths at or above 5%), generally have inflation rates between 3% to 4%.

The preliminary jobs number for December, 148,000, came in significantly below market expectations, and the monthly jobs numbers for 2017 are comparatively weak relative to the monthly averages for the previous 3-year period (2014-2016), especially when considering the lack in improvement of the labor force participation rate.

The Labor Force Participation Rate dropped back down to 62.7%, where it was when Trump first took office in January, meaning there has been effectively no lasting improvement in labor force participation in 11 months.

In 2016, then candidate Donald Trump repeatedly criticized then President Barack Obama, claiming that Obama’s economy was weak and that the weak job numbers under Obama were weak. At numerous points during his campaign and since his inauguration, Donald Trump has claimed that he would be “the greatest jobs president that God ever created“, indicating that the economy would eclipse that of Barack Obama. Four quarters later, Donald Trump’s claims have proven to be empty rhetoric.

By Trump’s own measures, if job numbers under Barack Obama were weak, what can be said of job numbers under Obama if, in 2017, the monthly job numbers only met or exceeded the average for the previous 3-year (post-recession and post-recovery) monthly numbers 4 out of 12 months and were a full standard deviation below the monthly means in March, May, June, July, September, and December? 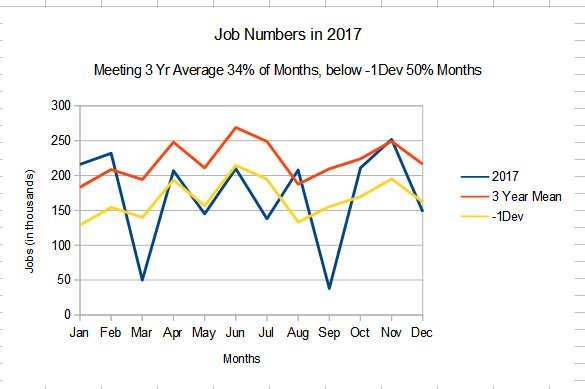 By all objective measures, the economy generated fewer jobs in 2017 than the previous 3 years. This isn’t political punditry, it’s merely a statement of fact. The Jobs and Tax Cuts Act passed in late December of 2017 will only begin to show any economic dividends in 2018, obviously too late to do anything about 2017. There’s a good likelihood that the tax cut provisions passed last year will boost the 2018 economy, because leaving money in the economy can’t but help the economy. What we will have to see is to what extent they will help the economy and what effects, if any, that will have on the manufacturing industry.

Given the extremely partisan climate in Washington, however, it is unlikely anything else is going to get done in 2018, at least politically. With the end of the individual mandate, killed by the GOP tax bill, big changes are going to be coming to the health insurance industry, and, at least near term, this will shake up the health care and related industries, as well as may impact the bottom lines of many industries as markets shift toward or away from benefits based health insurance coverage.

See everyone in 3 months.