Tomorrow, it all ends, at least as far as the election is concerned. Any delusions regarding the efficacy of one candidate over the other will finally be laid bare, and no one will be able to hide behind the uncertainties of polling data, the size of their rallies, or how unanimous support for their candidate inside their group of like minded cohorts is. For better or (more likely) for worse, this all comes to an end tomorrow, but tomorrow is likely only the beginning of what is to come.

The most fascinating and instructive imagery of Donald Trump’s campaign has been that of the “Trump Train“, barreling down the tracks, blowing through obstacle after obstacle, on its way toward some kind of inevitable and certain destination. This image of a run away train is wholly embraced by many of his most devoted supporters and is one that has some obvious as well as ominous implications. It is clear to anyone that the run away train is an acute reflection of the unsettlingly psychology of Trump’s most manic supporters.

To them, the image of a train propelling itself recklessly down its tracks reflects the urgency and, more importantly, momentum of their movement, fueled as it is by paranoia and angst over the future. The train is a conduit through which they somehow out pace their worst fears, powered by the echo chamber that reinforces their perception of reality, and burns away anyone that disagrees with them, adding more and more impetus to the train. Their rallies, their sloganeering, and their general ugliness to dissenters, all hack away at anything that might slow the train down.

As the Trump Train thunders by, we on the outside see the train as pure chaos, passengers clinging madly to its sides, shrieking a chorus of slogans to reassure themselves as they blast through one warning obstacle after another, put in place long ago by wise and thoughtful men. We see that, as the train barrels down the tracks, they aren’t outrunning their collective fears but amplifying them in a ceaseless drumbeat hammering their fears into a desperate and sightless mass hysteria. Donald Trump stopped being just a candidate to them long ago. He’s their messiah.

“Mad Hatter: “Why is a raven like a writing-desk?”
“Have you guessed the riddle yet?” the Hatter said, turning to Alice again.
“No, I give it up,” Alice replied: “What’s the answer?”
“I haven’t the slightest idea,” said the Hatter”
-Lewis Carroll, Alice in Wonderland-

Tomorrow, no matter what happens, the Trump Train runs out of track. Should Donald Trump lose, as he is predicted to, then the aftermath may be every bit as frightening as this whole fiasco of an election has been. These people will be free of the train, but the madness that has fueled their outrage will remain, and it will no longer have an outlet. I do not hold out any hope that these people will wake up on Wednesday morning, clear eyed, and think to themselves, “Silly me, I was overreacting the whole time.“

They are, after all, fully emotionally invested in this mass delusion, and they will see traitors and betrayers everywhere. The worst, I fear, is yet to come. 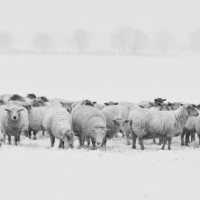